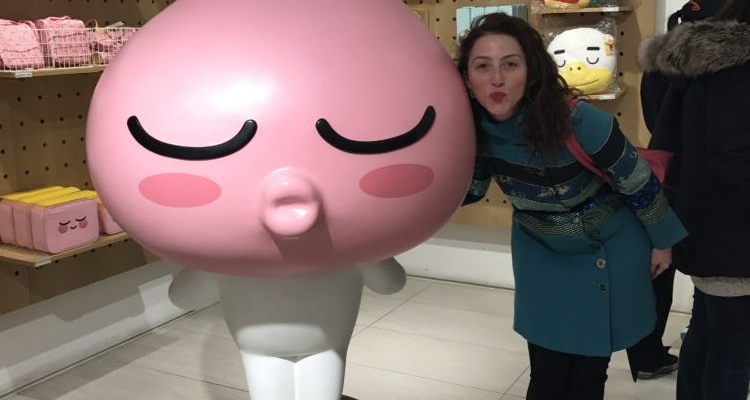 Feeling depressed? Travelling alone and need some cheering? So the right choice is Seoul! I have to confess I had no idea that this city could be so charming. Well, it is a very live, girly and a “cute” city so to say. My expectations from Tokyo were fulfilled in Seoul actually. As Japanese have this kawaii culture I thought I would be overwhelmed from this cuteness but NO! Tokyo is mostly gray full of skyscrapers.

What is different in Seoul?

Right after leaving my luggage at the hotel room I jumped out to see this shiny-lively Myeong-Dong. It was 22:00 but the stores were still open! The offical closing time is 22:30 but it is not like in Europe, but more like in Turkey, they do stay more, they let the customers in, so most of them were closed by 23:00. There were still some Street-Food sellers left so I wanted to have my first gastronomy experience and ordered a “fish cake”. I saw people were putting on some sauce with some kind of a thick brush. Without hesitation, I brushed my portion all sides with the unknown sauces. I don’t know what this confidence in me was! When I started to eat I realized the hotness coming deep inside with each bite and BELIEVE me it was pretty spicy! As I had excessive sauce in my food and I was still stubborn to eat it all, I ended up burning a bit, it tasted good and I could endure it, even kind of liked it however my poor lips got swollen and suddenly I had a natural lip operation :PM

Myeong-Dong is literally a heaven for girls,

all the Korean cosmetics brands have multiple branches here. So you lose yourself in the colours and in the cuteness based marketed products. This part of the city is pretty touristic so most of the Asians you see are either Japanese or Chinese.

Seoul is a pretty Christian city I was a bit surprised. Missionary and religious demonstrations are ongoing constantly and it has many young participants. They were against some kind of “chip” under the skin which made me think what this is all about? After asking the locals I understood that some people get some chips inserted to be tracked and according to Bible this should not be a right thing to do and they are supposed to go to hell. Wow such a technology related religious protest!

Seoul is way cheaper compared to Tokyo so you see Japanese shopping crazily all around. And it takes 1h 45m to fly between two cities so!

Just like Tokyo, Seoul has its interesting concept cafes. I have seen a “dog” cafe, “cat” cafe, Hello Kitty cafe. I tried to stop by but they open quite late like noon so I gave up. When you think I am living in Istanbul I am not very far from seeing stray cats and dogs in my daily life but I promised myself to pay a visit to “Owl Cafe” in Tokyo.

Seoul has two main palaces, the East one and the West one. The main one is the West one (Gyeongbokgung) however throughout the history it had been in the hands of Japan for some centuries so they build the one in the East. The East one has two separate parts as well. Because of Confuciunaism, men and women should live separately. All of a sudden I remembered our “Haremlik” “Selamlık” concept in our palaces because of Islam and took it as a mutuality.

The palaces are mainly empty. Only the throne room in both palaces were a bit decorated (curtains, some paintings, lightings etc). The beauty of the palaces lie not in the interior but in the exterior All of the buildings are made of very well painted wood. So it makes you think that the Ottoman had the tiles, the Elhamra had the carved stucco (plaster) and those guys are into wood.

Between these East-West palaces there is the famous Hanok village. This village has been carrying historical architectural structure so it is like a must see when you are there. Mum said some of the Korean TV-shows take place here as the “girl” lives in one of those beautiful houses.

On Saturday I have National Museum, War memorial to visit and I have a Korean BBQ dinner meeting with my German ex-pat colleagues.

Our reservation was in Itaewon so I took the metro and found the place using Google Maps. Each table has a barbecue area and you can grill yourself. The side dishes or I would call “Meze”s are for free and self-service. All you can eat for 1,5 hour costs 16,5000 Won including both beef and pork. The price is very reasonable, I can say that when we visited another BBQ place in Myeong Dong later on.

So they do not eat BREAD with this BBQ, I thought it would be weird but no! I was full and stuffed with meat :) They serve some side dishes for free such as kimchi, coleslaw or ssamjang (쌈장). I really loved this red sauce called Ssamjang it is a thick spicy sauce made of soy bean, brine, chili, sesame oil etc. It works really fine with the grilled meat.

Let’s begin with the war memorial. Both of these two are close to each other so I visited them one after another. Korea war is also very memorable for Turkey as many soldiers were sent during that period. After the US and the UK, Turkey is the country that has sent the most soldiers and suffered the most deaths. That is the reason why South Koreans consider us as “brothers”. That is a very strange feeling because as a person from Turkey, I have never been so apreciated abroad.

The museum had many interactive parts so you really feel the past… The National museum however, was a bit boring! I am embarassed to say that but that is the truth. 70% is consisting of pottery from different ages up until now… But it was also FREE… impressed.