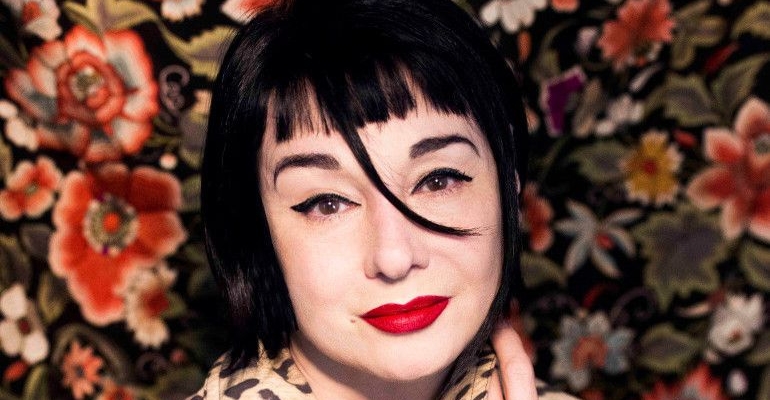 Mísia! With her short hair and black fishtail eyeliners and a red lipstick. She always had this firm stand as an image in my mind until the concert I have been to yesterday! I have completed my Fado singers mission now I guess: Cristina Branco, Mariza, Ana Moura, Teresa Salgueiro and now Mísia…

She is a talkative and a friendly person. She wore a black dress at first with a big red necklace which made me think for a while that it was a part of her hair. She had no shoes at first, barefoot. She began the concert with a fado classic  Solidão (Canção do mar), the Turkish audience knows this song thanks to Joy FM which made the French version very popular playing it all the time back in 2000s: “Elle tu l’aimes”. This song is a part of her new release that is dedicated to the Fado legend: Amália Rodrigues. So we can call it a tribute album that has two parts. One with the piano other one with the guitars ( Portuguese guitar, Viola Caipira and an acoustic bass). Her band included  Fabrizio Romano on the piano, Pedro Viana on the portuguese guitar (she called him Jon Snow of GOTH) , Daniel Pinto on the acoustic bass and Paulo André Ramos on the viola.

Mísia  is half Portuguese and half Spanish from Barcelona. Below she also sang a fado in Spanish. After the concert when we were talking about football teams ( a friend is a translator for footballers), she said:

As I am half from Porto half from Barcelona they always ask me which team I support and I always answer: Galatasaray! :)

Mísia mentioned that her first concert in Istanbul was 20 years ago and exactly in this same venue of Cemal Reşit Rey. The audience back then knew Amália so she was amazed! The next day she went to see a Turkish Classical Music concert and only then she understood why we actually liked Fado, because you know the depth she said…

She is fascinated with the country, she has been many times even had cup of coffee at Pierre-Loti ( I am ashamed of myself but I still haven’t been there!). The proud cats of Istanbul caught her eye too, she called them Ottoman cats though, and she even has a close Turkish friend called Yeşim which made her record the song “Biraz Kül Biraz Duman”:

She performed this song with another outfit, this time a red dress with high heels and a fringed shawl.

After the concert I had the chance to meet her in person. She was surprised that no Portuguese came to the concert, even not the embassy! I told her the embassy is in the capital Ankara, it could be the reason.

I was flattered by her compliment ( What a nice dress! )

And a family portrait of course